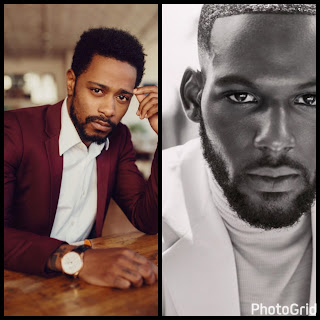 With so many fraud ninjas out here in the universe, taking up space, hating Black women, yet pretending to be Pro-Black (oxymoron) and just being wack af; it’s refreshing when BAE comes along and defends your honor against the bullshit.

Black women have been carrying burdens since the beginning of time and the shit gets burdensome. From working fifteen jobs, going to school, paying the bills, taking care of the household, spreading love, fighting racism, licking wounds, wiping white tears, defending Black men, being ladies in the streets, and a freaks in the bed, it can be tiresome to say the least. Getting verbally assaulted and crucified by public opinion ain't no walk in the park either, so when someone reaffirms that they have your back in this chaotic world, and allows you to take your cape off for a brief moment, you get all warm and tingly inside.
This week two Black male actors came to defend the honor of Black women, and for that they will forever be BAE! Queen Sugar’s Kofi Siriboe and ATLANTA’s LaKeith Stanfield had to check a few folks that tried to come for Black Queens. Lakeith said his driver stated the following:
‘Yo, black women they’re the hardest to deal with, man. They’re the most f**ked-up version of a woman you could have,’” LaKeith wasn't happy with those remarks and let ole boy know what the deal was. Lakeith had to let his Uber driver know that, when it comes to Black women, you will not bad mouth them in his presence. LaKeith said, ‘Whoa, whoa, wait, hold on. You talking to the wrong person man because as far as I’m concerned...the most beautiful aspect of black women is that they’ve been through the most s**t you could go through in this country,” he said. “You know what I mean? They really have been through the most s**t and that’s a beautiful thing.’”

Please click on the link to see how LaKeith defended Black women's honor:

Meanwhile, Kofi honored his mother & sister and their bold, beautiful, black skin on Twitter, and some minion wanted to pour herself in the mix.
Claire definitely tried to pull a Kanye, but sorry Clair, we ain't talking about that right now!

But wait, there's more... Bae Kofi had to let the world know that your continued disrespect and exclusion of Black women will not be tolerated on his watch. Therefore, he will continue to cape for Black women and not think twice about celebrating the women who built the pedestal he will continue to place them on! How Bow Dah!!!!!!!