If you’re a Black person in America, you pretty much know what a set-up feels, looks, and tastes like. We’ve been being set-up for quite some time, so it’s easy for us to recognize. Game recognize game. With, that being said, this whole lead up to Election 2016, seems like a complete set-up for American constituents to vote for Hilary Rodham Clinton.

Here are all the ingredients for a perfect Presidential set-up:

Step 1- Get the most ridiculous candidates you can find to run against the most qualified person in the bunch
Step 2- Make a pompous, arrogant, racist, jerk the front runner in the opposing party

Step 4- The person running against you in the same party happens to be a pro-Black, pro-Human, anti-Establishment, Martin Luther King, Jr. marchin, for-the-People white male from Vermont

Step 5- Get an interview on the most popular radio show in the country (The Breakfast Club) and claim that you carry hot sauce in yo bag, and therefore you have swag

Step 6- Lie every chance you get, based on whatever crowd you’re in front of at the time of said lie 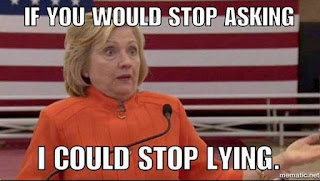 
Hilary has been in the politics game for a long ass time. She has been plotting to be President since she was the First Lady of this great nation. It’s pretty safe to say, that she was probably getting her Presidential on back then, and Bill was a mere figurehead.  Although, I am a young tenderoni, I have been in the world long enough to be affected by Ronald Reagan’s Reaganomics, which screwed Black people, George H.W. Bush and his shenanigans, which screwed Black people, Our homeboy Bill Clinton, who implemented prison reform, which in turn really screwed Black people who didn’t even commit violent crimes. So, if your Mom’s favorite cousin Tyrone, or your Uncle LeRoy is still in the Pen doing a 30 year bid, for carrying a gram of weed or crack, be sure to thank your favorite saxophone playing, not-inhaling the weed ass President William Bill Clinton. Which leads us to George W. Bush, who screwed everybody and ruined lives for a span of 8 years; his bullshit didn’t discriminate, however, in keeping up with American tradition, Black people were affected the most. And last, but certainly not least we were redeemed by the coolest President ever: Barack Hussain Obama, who actually made sure ALL THE PEOPLE were good. Now, I’m not saying Hilary will be a bad President, I’m just sayin’ the shit was set in motion a long time for her to be President and this whole song and dance they’re doing to make it seem like it wasn’t is an insult to my intelligence and yours. I know a set-up when I see it!
Labels: African Americans America Americans Barack Obama Bill Clinton Black people Candidates Donald Trump George Bush Hilary Clinton President Presidential Election Ronald Reagan